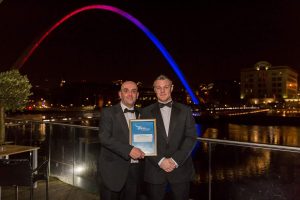 Jigsaw Recovery Project were told about the If You Can We Can Awards, from Paul Slater (Brand NU Design) who does all our design work through his start up business.

Paul encouraged Me (Terry) to enter the competition for JRP.

When I sent of the entry, it was tight to the deadline around 10 minutes to spare. It was the first time I had even looked at entering JRP for an award so was not holding out much hope.

I was contacted by Owen from the IWCYC team, who asked me to fill out more information in regards to JRP`s work. This I did and after about a week, I was contacted again by Owen telling me to keep the evening of the 15th November free as JRP had made the final 15 candidates.

On the night both Mark Tunney (Director) and I had to dress in black ties for the awards but both of us scrubbed up well.

We went to the awards expecting nothing but knowing that this was a extremely great achievement! to even get to this point.

I had to deliver a 1 min pitch to each of the 15 tables in the room, telling them about the work we do at JRP and how it impacts on the most at risk young people leaving local authority care.

I was nervous at the start, by table 15 I was in full swing and the pitch was down to a tee. I was told of a few people after that my over riding passion and determination to help these young people was so infectious it was hard not to vote for JRP.

We gained entry to the second stage of pitching, which was 6 companies with a three minute window to sell their service. This I smashed, as I personalised it from my own experiences. To be fair when I heard the rest of the pitches, I personally only feared one other contestant, that was These Girls Can Run, who would beat us to the Biggest Social Impact Award. Lucky for us that was not he case.

Shepard’s Storage won the other Award of the evening with Highest growth Potential. Congratulations!!!